or “The Butcher! The Breaker! The Candlestick Maker?”

As usual, I’m 5 years behind the trends, so I’m just now seeing Keanu Reeves shoot-bang a bunch of KGBitches. It’s good to see him sticking with the action stuff though, because as great a guy as I’ve hear he is in real life, that doesn’t change the fact that he both sucks AND swallows as a “legitimate” Hollywood actor guy. Big budget b-movies are the man’s forte and he should stay that way.

“What happened, John? We were professionals. Civilized.”

John is our titular protagonist. John is madly in love with his wife, Helen. Sadly, Helen’s only in the movie for Fridging purposes (look it up), so she immediately dies of brain cancer. Helen’s death leaves John in mourning. Before she kicked the bucket, Helen set up a gift to be delivered to John after her passing. John’s gift is Daisy. Daisy is NOT a surrogate wife nor is she a sassy orphan. Daisy is a puppy. John bonds with Daisy faster than Neo learned Kung-Fu, and through the adorable beagle he learns to love again. John and Daisy run into some douche nozzle (who looks like a junkie version of the guy who runs my favorite comic book shop) at a gas station who wants to buy John’s sweet ’69 Charger. John says no. Douche Nozzle and his gang of pricks somehow figure out where John lives, ransack his home, steal his Charger, and kill Daisy to solidify their status as the worst type of cheap-heat bad guys. What is our hero to do in the face of such tragedy? Will he compartmentalize his anger and sadness and learn to live on despite his loss? Perhaps he’ll open his own Yankee Candle franchise and parlay his surname to become the highest earning store in the tri-state area!

No. Despite his name, John is not a born candle salesman. As it turns out, John is actually a retired mob assassin and the sole meaning to his existence now is to exact revenge on the sapient sandwich baggies of human excrement that have wronged him. Unfortunately for John, it won’t be an easy train ride to Revengeville, because Douche just happens to be the offspring of one of John Boy’s former employers, Viggo – the head of the Russian mob that basically runs the New York City underworld. When said head hears what the half-witted fruit of his loom has been up to, the only hope of keeping bitch boy alive is to put an open $2 million bounty out on John. Can our hero enact his vendetta to its finale, or will Daisy and Helen not be the only members of the Wick family who won’t live to see the end credits?

… Nah. He lives. He has to. There are two sequels to this movie!

With a little help from his friends, revenge is had and JW guns down enough Ruskies to fill the St. Remy Cemetery twice over! Granted, that’s in Russia Ohio and not Russia proper, but you get the point of my pickelhaube… which is a Prussian reference and not Russian proper, but you don’t have to be King of Prussia to know that. I am, of course, referring to the Pennsylvania township, King of Prussia and not an actual Prussian king proper, but… I’ll stop now.

My problems with this movie are minimal. The whole “one man murders dozens with relative ease” action trope doesn’t bother me anymore in the least. If Stallone and Schwartzemuhneijer could do it every few months in the ’80s, why the fuck not? Hell, even if you discount America’s steroid juiced dreams, every John Woo (John Woo? John Wick? Hmmm) movie since The Killer has desensitized us to the logical frailty behind the 1 vs 100 scenario in favor of taking another dove poop covered Gunkata bullet ballet directly into our oculars. Besides, after watching Keanu Matrix his way through a thousand low-res Hugo Weavings, I can totally buy him (and his snappy new facial hair) emptying enough bullet cartridges to recycle into TWO full-sized brass statues of Gaston Glock!

(He’s the guy who invented the Glock)

My issues with the kickstart of what is a trilogy as of this weekend are instead as follows: like I mentioned earlier, how the fuck did Douche Nozzle find out where Wick lives? Also, if Wick is such an infamous boogeyman figure in the criminal underworld, how did neither DN nor any of his goons know who he was? This is made all the more infuriating when dear daddy tell his spermatic waste product that Wick is basically responsible for handing them all of the criminal power they now wield! Speaking of, fuck Viggo for not killing John when they have him unconscious at their feet and instead opting for a bullshit “we’re not so different, you and I” cookie cutter scene from which John is deus ex Dafoe’d away, allowing him to CONTINUING HIS SLAUGHTER MISSION. Finally, yeah, Keanu Reeves can’t do dramatic. I started off the review saying so and thinking of his big “I’M THINKING I’M BACK!” speech in this same said scene, I need to reiterate – do not give this golden hearted gent severe lines of dialogue. You set him up as the strong/silent/violent type, so don’t issue him any groan inducingly hammy shoutliloquies!

In a perfect world, I would use my Midas-like wealth to fund a crossover film between John Wick and Shoot ‘Em Up‘s hero, Mr. Smith. It’d be your typical comic book scenario where they’re pitted against each other by insidious forces, each fails to put down his opponent until they realize that a brief exchange of words rather than bullets solves their problem, leaving them to now team-up and murder every member of the criminal empires involved. The twist? Deadpool is the one behind it all. Biggity-bam, motherfuckers. Double tap that ass. Makes more box office than every Police Academy combined.

Moral of the Story: IF YOU HAVE THE MOST DANGEROUS MAN ON EARTH TRYING TO KILL EVERYTHING YOU LOVE AND HE ENDS UP KNOCKED OUT AT YOUR FEET, JUST CRUSH HIS SKULL WITH A CINDER BLOCK AND CALL IT A DAY.
Final Judgment: 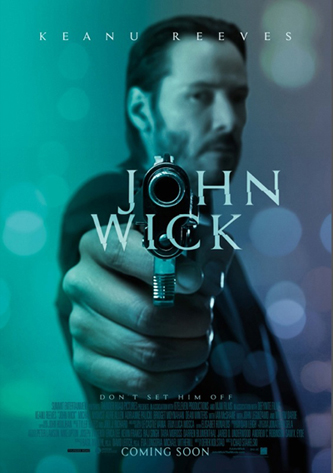